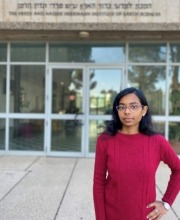 Dissertation Title: Collapse and Recovery of an upwelling ecosystem following the Cretaceous-Paleogene mass extinction – insights from the margins of the Southern Tethys

The Cretaceous-Paleogene mass extinction (KPg, ~66.04 Ma) had a great impact on marine as well as terrestrial species. In the marine ecosystem, up to 93% of species and 85% of genera of the haptophyte calcareous algae became extinct at the Cretaceous–Paleogene boundary (KPgB). However, there is a severe argument on the recovery phase of the K-Pg mass extinction which is measured through primary productivity proxies.

In this study, we will focus on a newly recovered drill core from the Golan Heights that allows for the first time to study the changes took place across the Cretaceous-Paleogene transition in the Tethyan upwelling system. In this system deposition occurred under an extensive high-nutrient regime that continued since the Santonian (~86.3 Ma). The high nutrient levels resulted in high productivity at the sea-surface and oxygen deficiency in the bottom waters and, subsequently, led to unusual faunal assemblage composition and to the preservation of OM-rich sequences. Initial results of this study by Rosenberg et al. 2020, has shown that this upwelling productive ecosystem was not terminated in the Maastrichtian as suggested by previous studies5, but continued well into the Danian (~61.6 Ma), crossing the KPgB. Hence our goal is to study the Golan core in a meticulous way that would give a unique opportunity to understand the recovery following the KPgB in the context of a high productivity regime. Therefore, the study has significant importance in understanding the recovery phase of KPg mass extinction.

In this project, we will carry out a detailed analysis of biomarker signatures through Gas Chromatography Mass Spectroscopy (GC-MS). Few preliminary data of biomarkers have suggested a relative change in the primary producers across the KPgB, but an extensive study of biomarkers (from different fractions of saturates, aromatics, and polar) is required for better understanding. Furthermore, this study will include both the bulk and compound-specific isotopic analysis (carbon and sulphur) to gain more insightful conclusion. The research will be carried out in both the Hebrew University of Jerusalem and Geological Survey of Israel.