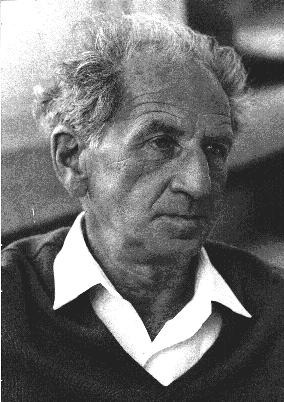 Yaakov Bentor was born in 1910 as Kurt Winter in Konigsberg (then Germany, presently Russia). He studied Law, Linguistics and Physics and in 1933 he moved to Jerusalem, changed his name to Bentor and joined Prof. Y.L. Picard in the first years of the Geology Department. He returned to Europe for further studies and investigated the volcanic rocks of the Massif Central. World War II broke out just before he was awarded his Ph.D (which he received Summa cum Laude in 1945). Back in Jerusalem, he completed a second Ph.D on the dolomites of the Jerusalem Mountains, and became the first Ph.D in Geology of the Hebrew University.

In 1948 Bentor first joined the Science Unit of the IDF (HEMED) and studied the Timna copper deposit and the Negev Phosphorites as part of his studies that grew into the Geological Mapping of the Negev, for which Bentor and Vroman were awarded the Israel Prize in 1955. In 1953, Bentor was appointed as the Chief of the Geological Survey and later as the chairman of the Department of Geology at the Hebrew University. After the Six-Day War, he embarked on the second major project of his life: mapping the Sinai Peninsula. After retirement Bentor moved to La Jolla, California, where he joined his wife Prof. Miriam Kastner. He died in La Jolla in 2002 and was buried in Jerusalem.

Yaakov Bentor guided several tens of graduate students many of which became leading figures in Israeli Geology. He was an inspiring teacher and a superb scientific leader. The mineral Bentorite was named in his honor.

Preparing an address in memory of Prof. Yaakov Ben-Tor is a real walk down memory lane. In doing so, I found myself digging rather deep, going back several decades to my first days of my first year of Geology at Mt Scopus with a bunch of pretty rugged recently-discharged soldiers (i.e., from their mandatory service in the IDF), armed with pen and paper, who gathered in the basement of the building in a kind of a cellar that the university called “a classroom”.

Suddenly, in walks a man who seems very old and – what, is that a spell he has cast on the class?? In his mysterious tones, he talks about minerals and crystals and rocks and mixes in figures from Greek mythology and the Bible, at the same time quoting Hegel or Spinoza or Descartes. He then wraps all of this in descriptions of volcanoes or images from the depths of the seas. And in the breaks, when the guys try and ask him what he means with these mysterious words, the old sorcerer blows smoke on them from his magic pipe and chases them out of the basement amidst extended fits of coughing.

But, let’s face it, if we – this gang of gangly almost-ex-soldiers – had studied law in Königsberg, physics in Berlin, linguistics in Paris (at the Sorbonne!) and geology in Zurich, Grenoble and Clermont-Ferrand (where he was a doctoral student, researching volcanic rocks from the Massif Central) – and all that was before World War II, when Ben-Tor was mistakenly arrested in France for being a German spy –  and then earned a doctorate in geology (the first ever to be awarded) at the Hebrew University of Jerusalem (on the geology of the Lower Galilee), as well as a second doctorate from the Sorbonne on the Massif Central… well, come on! Maybe if we had passed through all these stages of life that must sound to you like a series of improbable and unbelievable tales, or in today’s vernacular, fake news, then maybe we too would have become successful sorcerers?

Very quickly we learned that these were not just crazy stories but truths as hard as rock in the Hatrurim Formation. Other people who wandered through the basement of Mt Scopus in those days, who we believed then (and only then!) to be trustworthy, like, for example, Abraham (Stari) Starinsky, told us that Ben-Tor, together with his good friend from the Technion Akiva Vroman, headed out, in the middle of the War of Independence in 1949, to conduct mapping surveys of the Negev in an attempt to find oil and uranium. They didn’t find any, but they did discover, and subsequently research, phosphate deposits and copper from Timna, and for that work they were awarded the Israel Prize in 1953 (while we, the rough-and-ready mob were still in cloth nappies). But then Stari let us into a sweet secret: “You might want to know that he is scared of heights and he doesn’t climb hills.”

The years passed, wars came and went, and the old wizard (who was probably in his early 60s by this time) led his gang of almost-demobbed soldiers to the hills and the mountains, and to the place he loved most of all – Hahar Hagavoha, the high, dry mountains of the southern Sinai Desert. There you could make real magic: take Um Malik Granite, add some Ikna Granite and build the largest “ring dyke,” then throw in the ignimbrites of the Neshef Mountains (west of Eilat) and a sprinkle of manganese deposits from Um Bogma, and create a whole new continent. And all that through the bluish cloud of pipe smoke and those never-ending coughing fits, which continued until he reached the great age of 92.

Maybe the spell was actually simmering inside the pipe? Moshe Eyal, an exemplary student of Ben-Tor’s, would say that it was the pipe smoke that would lend a calm and creative atmosphere to those participating in the Sinai trips. Who knows…?

And so, you can see, that giving a speech about our outstanding teacher, Prof Yaakov Ben-Tor, is indeed a walk down memory lane. But rather like the wafting pipe smoke, the memory drifts, yet what is left are the people, the many students and the students of the students, who Ben-Tor led both as a teacher and as a director for a time. Once it was called the Geology Department. It evolved to become what it is today, the Institute of Earth Sciences.