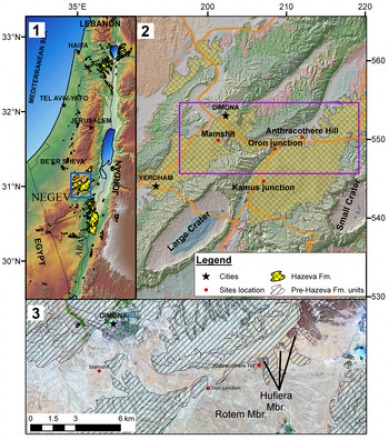 During the ongoing project led by Rivka Rabinovich, Ran Calvo (Geological Survey of Israel) and Ari Grossman (Midwestern University, Arizona) on the physical, climatic, and environmental conditions during one of the main biota dispersals through the Levantine corridor during the early middle Miocene, new localities were found and old collection were revised.
In a recent revision of the rhinocerotid material from the Negev led by Luca Pandolifi (Università degli Studi di Firenze) two different genera were found: Brachypotherium cf. B. snowi and cf. Gaindatherium sp. Brachypotherium cf. B. snowi demonstrates that the Levantine corridor was utilized by Brachypotherium as the genus dispersed presumably from Asia to Africa. Previously, cf. Gaindatherium sp. was only known from the Siwaliks of South East Asia. The material from the Negev demonstrates that this genus dispersed out of that region into the Levant and likely into Arabia. The occurrence cf. Gaindatherium sp. represents a previously unrecorded range expansion out of Southeast Asia. These new records demonstrate the paleogeographic importance of the Levantine region showcasing the complex role of the Levantine corridor in intercontinental dispersals between Asia and Europe as well as Eurasia and Africa

Read the full article in Journal of Paleontology