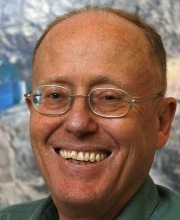 My research interests encompass the fundamentals of atmospheric and oceanic dynamics. The complex whirling of eddies of all sizes, the majestic major ocean currents or jet streams in the atmosphere are all examples of large scale dynamical features of the ever evolving fluids that move on the surface of the rotating spherical earth. The amount of fluid (be it gas in the atmosphere or saline water in the ocean) that are transported by these flows is too large for us to grasp at first glance. The Gulf Stream transports about 100 million tons of water every second from low latitudes to the mid-latitudes along the eastern coast of North America; about 3,000 times the amount of water flowing down the Niagara Falls. The Subtropical Jet Stream in the atmosphere transports about half-a-million tons of air (recall that the density of air is about 1/1000 that of water) around the earth from west to east at altitudes of about 10 km and speeds of the order of 100-150 km/h. The existence of the Subtropical Jet Stream enables the Israeli Airline El-Al to fly non-stop from Los-Angeles to Tel-Aviv, which it does in the opposite direction quite seldom. In my Geophysical Fluid Dynamics (GFD) research I attempt to define the exact physical origin of certain fluid dynamical phenomena and to provide exact theoretical descriptions of their observed features (such as the way they change with time and space). I also attempt to highlight the geophysical ramifications of their presence.

In recent years I developed a theory of non-harmonic (also described as Trapped) waves of Geophysical Fluid Dynamics based on the formulation of a time-independent, Schrodinger eigenvalue equation for zonally propagating wave of the Rotating Shallow Water Equations (AKA Laplace Tidal Equations). The energy levels of the eigenvalue equation provide explicit expressions for the phase speeds of the waves and the associated eigenfunctions describe the meridional amplitude structure of the various waves. This formulation is relevant to many physical settings including the mid-latitude f-/\(\beta-\) plane, the equatorial \(\beta-\)plane and the spherical Earth. In particular, this formulation provided, for the first time, explicit expressions for the dispersion relations of Planetary (Rossby) waves and Inertia-Gravity (Poincare) waves on the spherical Earth (i.e. a rotating sphere but without the centrifugal acceleration. In additon to providing approximate, but highly accurate expressions for Planetary and Inertia-Gravity waves on the spherical earth the formulation of the  Schrodinger eigenvalue equation has provided a clear demonstration that Yanai wave (AKA the mixed Rossby-Gravity mode) exists on a sphere but for different reasons than on the equatorial \(\beta-\)plane: In the latter this wave exists only because the second westward propagating wave is associated with singular zonal velocity while on a sphere the approximate solution by the Schrodinger equation yields an unacceptable (complex) phase speed near the gravity wave phase speed.

In contrast to the planar theories where Kelvin waves exist as additional modes to Inertia-Gravity waves (e.g. modes in which one velocity component vanishes identically so the other velocity and the height fields solve the three scalar Rotating Shallow water Equations) on a sphere these waves do not exist at all but the eastward propagating Inertia-Gravity n=0 mode is nearly non-dispersive.

These theoretical advances enabled the construction of test cases for the dynamical cores of global scale General Circulation Models and the explicit expressions have also been applied in the interpretation of satellite borne observations of Sea Surface Height Anomalies in the Indian Ocean south of Australia where the nearly zonal coast provides the "wall" at which the waves are Trapped.