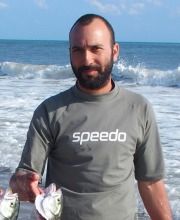 The overarching aim of my research is to better understand the global material cycles in our planet, especially how the recycling of volatiles such as carbon and hydrogen from the surface to the deep Earth are related to the fluxes of oceanic and continental crust through time.  I combine petrographic, geochemical and spectroscopic work utilizing various analytical capabilities (including TEM, EPMA, LA-ICP-MS, TIMS, gas mass spectrometry and Raman and infra-red spectroscopy), to study the trapped minerals and fluids in diamonds and the compositions of basaltic magmas that cover the spectrum of mantle compositional “flavors”, as monitors of deep Earth processes.  My long-term intent is to remedy the full spectrum of deep mantle carbon- and water-rich (C-O-H) fluids, provide first-order understanding on the role of such fluids in transporting volatiles and incompatible elements between mantle (and crustal) reservoirs, and link tectonic events in the (shallow) continental crust and chemical events involving C-O-H fluids in the deep mantle.

Diamonds through time - a new approach to unraveling Earth history; major and trace elements and Nd, Sr, Pb and He isotopes of ‘fluid-rich’ microinclusions-bearing diamonds globally.

The different sources contributing to mantle-derived melts in OIB and their linkages to mantle metasomatism; compositional variations of olivine phenocrysts and their host basalts from different extreme mantle end-members.

The spectrum of mantle components incorporated in mantle melting under the Levant margin (Israel and Jordan), as a response to different tectonomagmatic phases that shaped the northwestern Arabian plate.